Get the dust off!

You said you were going to change, but dust has already settled on your decision. Today, get busy, remove the dust.

We must continuously act on our positive decisions or they will gather dust quickly.

If we are not careful, a spider web will show up in places we dusted and cleaned a few days ago.

If we make decisions but fail to act on them, dust gathers on them. 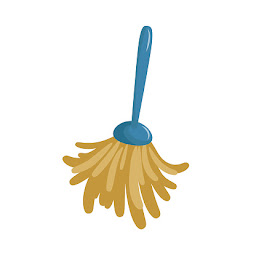 We have dusty Bibles that we have not read, dusty promises we have not kept, and dreams that are gathering dust.

If you put aside your decision to change or improve your life, that decision will gather dust and will soon be buried beneath good intentions.

God has plans for those who trust him. He wants to build us in every way if we let him. However, we can’t let God’s plan gather dust.

Remember Jeremiah 29:11 “For I know the plans I have for you,” declares the LORD, “plans to prosper you and not to harm you, plans to give you hope and a future.”

As you begin this day, resolve to act on God’s plan for your life.

Whether it's spiritual strength, improved health, or finances and continued grace, plan to act on your decision to improve.

Posted by Roosevelt Wright, Jr. at 4:54 AM No comments:

Look at your schedule today and dress appropriately.

Consider what you will do today and to whom you will present yourself and dress for that moment.

In 2005, the Northwestern University Lacrosse Team was invited to meet the President in the White House. President Bush had strict dress standards; jeans were forbidden and ties were required for males. When the lacrosse team showed up wearing flip-flop shoes it caused a national stir. – It appeared that the champions didn’t present their best selves to the President. 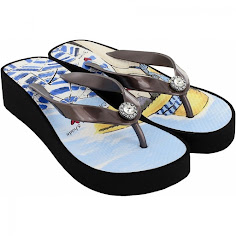 It’s confusing to some who are frowned on for dressing casually for worship but formally for school prom or debutante ball.

Should it matter? If we work in the church, live a Christian life, and love God, should it matter that we choose to worship in short pants or a bikini?

When we worship we are responding to God’s invitation. It’s not an invitation to the White House but to God’s house.

We should present our best selves to him, spiritually and otherwise.

Today, whether you are going on a job interview, important meeting or worship service, remember to dress appropriately.

Remember Proverbs 14:12 “There is a way which seemeth right unto a man, but the end thereof are the ways of death.

You may not go to the White House today, but wherever you plan to go, let your outside reflect your inside and dress for success.

Posted by Roosevelt Wright, Jr. at 3:54 AM No comments:

It’s hard to give up old habits. Sometimes, when forced, we can appear to reform, but without a major rebuild of heart and soul we soon revert to old ways. 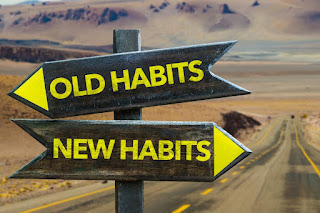 Noah brought a pair of Ravens on the Ark with him. For a year the ravens appeared to change, but to no one’s surprise, once released they returned to old habits.

In a similar sense, many people come to God in an hour of crisis. They pray and ask God for special considerations after a major sickness, tragedy, or failure. They make promises to God that are real at the moment.

For a while they change their habits, they attend church, and seem to be different; yet, on the inside they are still the same people. A truly repentant person becomes a new person, not just a person who attends church.

2 Corinthians 5:17 says, “Therefore if any man be in Christ, he is a new creature: old things are passed away; behold, all things are become new.” There is no substitute for being “In Christ.”

The raven took advantage of the safety of the ark and diet of fresh foods it offered for a year, but at the first opportunity, it intended to go back to its old ways.

We are new creatures in the Lord. We have no “taste” for worldliness. We are focused on Christ and him alone.

Posted by Roosevelt Wright, Jr. at 1:25 PM No comments:

Father to the fatherless

Have you noticed the number of fatherless homes there are today?

The latest official reports estimated that there are 25 million people who are from single-parent homes where the father is unknown or absent from the family he begat.

That’s a big problem. John Sowers, in his book “Fatherless Generation,” says society is paying for this breakdown in families with higher crimes and a cultural shift that’s really taking a toll.

We can’t undo what already exists, so he suggests that we all become mentors for the fatherless kids on our street. Fathers and grandpas have a lot to offer and you’ll be surprised, often our efforts to give advice or be a friend will be accepted.

God is our spiritual father and we are all his children.

When we work with the kids of fatherless homes, they see the hands of God and they hear the voice of God when we speak.

Through our concern, they come to know that God, working through us, reaches out to them in love.

Romans 8:16 The Spirit himself testifies with our spirit that we are God’s children.

Let’s pray for the fatherless families and also for the baby daddies that don’t know how to be fathers.

Until then, let’s show the kids the love of the father, which is in heaven.

Posted by Roosevelt Wright, Jr. at 1:48 PM No comments:

Stay on the path, it leads to glory

Despite our burdens, every believer should march on, singing the words of our anthem: "God of our weary years, God of our silent tears, thou who has brought us thus far along the way, thou who has by thy might, led us into the light, keep us forever in the path we pray!" 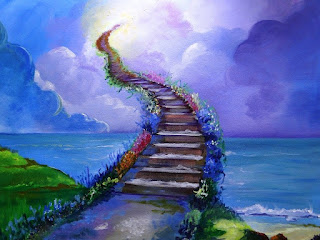 If we stay on the right path God will be for us. Romans 8:31 reminds us that "If God be for us, who can be against us?"

If we stay on the right path, it won't matter about the burdens because Romans 8:37 says, "In all these things we are more than conquerors through him that loved us."

If we stay on the right path, it won't matter how many barriers are placed in front of us because we remember that Philippians 4:13 says, "I can do all things through Christ which strengtheneth me"

Troubles don’t matter when you know the Lord is with you!

When the Lord is with you, you can call on him, like great-grandma did when she said, "Lord, I'm down here waiting, please don't pass me by!"

Psalm 55:22 “Cast thy burden upon the LORD, and he shall sustain thee: he shall never suffer the righteous to be moved.

Walk with me Lord, Walk with me! While I'm on this tedious journey, I want Jesus to walk with me.

Posted by Roosevelt Wright, Jr. at 2:58 PM No comments:

The beauty of the Christian life is that we have learned to be happy in any situation; it’s all good!

A few years ago a young lady attended our worship service and sat smiling on the second row. I recognized her presence and asked her to stand, but someone whispered to me that she had no legs. Embarrassed, I tried to play it off and told her to wave her hand. That’s when they told me that she had no arms.

She wasn’t offended but kept a big smile on her face because without arms or legs she has led a happy life, had a boyfriend, and believe it or not was once suspended from school for fighting. And she won!

She dresses herself, gets around by herself, feeds herself, and seems to be the happiest person around.

She learned to live with conditions that others thought were handicaps and enjoys every day of her life.

As Christians, we have learned to enjoy the life God has given us. Sometimes we have and sometimes we don’t have. We can be happy either way.

The secret to happiness is giving God thanks for what you have without complaining about what you don’t have.

It’s all good because it's the life God gave us to live.

Posted by Roosevelt Wright, Jr. at 5:02 PM No comments:

Anyway the wind blows is cool with me

A windmill stands isolated and alone and harnesses the wind from any direction. It's reminiscent of the old Syl Johnson song: Anyway the wind blows is cool with me. 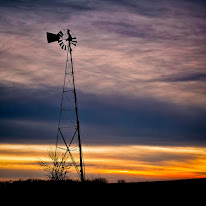 You’ve never seen a windmill turn backward because they have a tail or rudder that detects the wind direction and the windmill changes when the wind changes. Big turbines are designed to rotate to face the wind and have sails or blades designed to absorb the impulse of the wind into its rotation. They will always do that and will turn as designed, no matter the direction of the wind.

Windmills harness the wind and generate power; it doesn’t matter the direction. Just as a sailor can harness the winds that go against him and force it to push him forward.

We should learn something from these truths. Sometimes the winds don’t blow the way we like or they blow against us, but we should be sensitive to the direction that the Holy Spirit leads us; He teaches us how to face an evil wind and keep going straight ahead toward the prize.

John 3:8 The wind blows where it wishes, and you hear the sound of it, but cannot tell where it comes from and where it goes. So is everyone who is born of the Spirit.

Everyone born of the spirit knows how to harness the wind and say, “Anyway the wind blows is cool with me.”

God’s got my back

Posted by Roosevelt Wright, Jr. at 4:10 PM No comments: